Dogs are often referred to as man’s best friend and it’s no surprise why! these angelic creatures have been mankind’s best companions for thousands of years and help us in so many ways with our daily lives. they come in a variety of sizes, colors and different breeds have different characteristics. most of the breeds are considered to be loving and affectionate, however, in this article, we are gonna show you the top 10 dogs in India 2021. 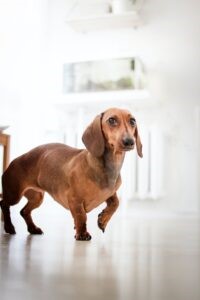 It originated in Germany as a hunting dog. “Dachshund” itself is a german word meaning ” badger dog “. As the name suggests these dogs were bred to hunt badgers since their structure made them just ideal for this task. These dogs come in 2 sizes that are standard and miniature and they belong to the hound group. even though they are small dogs but they are extremely energetic and their bank bark is so loud, which can terrify someone easily.

The height of the Dachshund is about 13 to 16 inches and can weigh around 16 to 32 pounds, whereas the height of the miniature Dachshund is around 8 to 9 inches and can weigh around 11 pounds or less. Also, you might think since they are small dogs their energy requirement must be pretty low, however even though they have a small digestive tract their energy requirements are not less than a large dog, and need to be on a diet high in protein.

Also, it is extremely important that we do not allow them to be overweight as it can strain their long back, so they ignore their pleading eyes and feed them only the recommended amount of quality dog food. they love unconditionally and if trained properly, they can be the most friendly breed and socially gel well! These dogs belong to two breeds of the spaniel dog type. The British Cocker Spaniel and the American Cocker Spaniel are both known as cocker spaniels in their respective nations of origin. This might surprise many of you all but In the United Kingdom, cocker spaniels were initially developed as hunting dogs. The word cocker comes from the fact that they were used to hunt the Eurasian Woodcock. When this breed arrived in the USA, it was trained to hunt the American Woodcock.

These dogs are medium-sized with dark almond-shaped eyes. Its also known for its silky coat which is flat or slightly wavy. Its height is around 13 to 16 inches and can weigh anywhere around 20 to 30 pounds. They need regular grooming as avoiding might lead to tangling or mats in their coat.

They are generally sensitive to the reaction of their owner, that is your approval or disapproval matters a lot to them. They are gentle, loving, and trustworthy family dogs and good with children, the elderly, and other pets! They have a soft personality so you might have to avoid the harsh training methods as it might make the pup fearful! It originated in Scotland and was bred to retrieve shot waterfowl, such as ducks and upland game birds during hunting and shooting parties. The name retriever itself refers to the breed’s ability to retrieve shot game undamaged due to their soft mouth. This dog breed loves nothing more than water and playtime! Golden Retriever is extremely popular with people as pets due to its loving and obedient nature.

It is intelligent and can make a good watchdog as well, It is good-looking, the medium-sized dog probably will steal your heart right away! Its coat is dense, straight and wavy, and requires regular grooming. It belongs to the sporting group and its height is mostly between 20-24 inches and can weigh anywhere between 55 to 75 pounds.

They easily tend to be obese and therefore their calories intake might have to be on close watch. they are easy to train, loyal, and eager to do as instructed by their owner. They are not exactly one man’s dog type breed and gel equally well with the people known to them.

They are extremely patient with kids and socialize well. They don’t only make a good family dog, but also make an excellent disability assistance dog such as being a guide dog for the blind and a hearing dog for the deaf. Golden Retriever breed ranks fourth in Stanley Coren’s ” The intelligence of dogs” 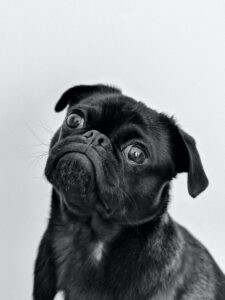 Pugs originated in China and have very distinctive physical features such as wrinkly, short-muzzled face and curled tail. They have a shiny coat and a compact square body in a range of hues, the most common of which are fawn or black. They belong to the group and mostly weigh around 15 to 18 pounds, with a height of 11 to 13 inches.

They are charming, playful but also stubborn and definitely need to be trained early on, or else they can be pretty difficult to housebreak. That being said they are one of the best family dogs and ideal for small households and apartments.

They are fond of children and can be a reliable play buddy! They are highly adaptable dogs and equally cherish staying at home or play outside. pugs are a little vulnerable to obesity, so a high-fat diet is a strict no-no. Also, their hair fall is pretty low, neither do they need a regular bath, therefore, making them very easy to maintain! Rottweiler originated in Germany and in one of the oldest herding breeds, some say it has a history possibly dating to the Roman empire itself. They belong to the utility group with a height of about 24 to 26 inches and can weigh anywhere between 90 to 110 pounds and mostly in black with tan, or black with well-defined mahogany color. They are known for their enormous strength and are incredibly devoted and loyal to their loved ones which makes them great family pets.

They have great intelligence and guarding instincts. Since this breed is so strong they thrive on a high protein moderate-fat diet to fulfill their high energy requirement. Their coat consists of an outer and an undercoat. Also, they are hypo-allergenic means they are least exposed to allergies. Rottweilers are well-natured, docile, loyal, and hasty to work. .

They are calm courageous, and confident dogs however they need to be socialized right from puppyhood for them to be well behaved. After all, we don’t want all that strength and power to turn into any form of aggression! Doo wee? The Labrador Retriever, Labrador, or just Lab is the most popular dog breed in most of the nations. Labrador Retriever originated in the United Kingdom and Canada. They come in 3 colors, that is black, yellow and chocolate. They belong to the sporting group and weigh between 55 to 80 pounds and the height is in the range of 22.5 to 24.5 inches.

They have a short, dense, and water-repellent double coat. Their sense of smell allows them to home in almost any scent and follow the path of its origin.

They generally stay on the scent until they find it, It’s no surprise that Navies, Militaries, Police forces use them as detective dogs to track down the smugglers, burglars, terrorists, etc. Labs are pleasant, outgoing, and super active. They love company and are great with kids. Since labs are famously friendly and bond with the whole family, they make excellent companies housemates. 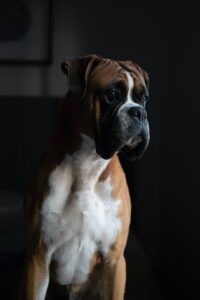 It was developed in Germany and belongs to the working group. Boxer was appointed as the messenger dog, pack carrier, attack dog, and guard dog by the military during world war 1. It was not until after the second world war that the Boxer became popular around the world.

Taken home by the returning soldiers, they introduced it to a wider audience and it soon became a favorite companion. It is intelligent, sporty, and easy to train, and comes in brindle, fawn, and white color. Weigh around 50 to 80 pounds and the height is anywhere between 21 to 25 inches. It has a short and shiny quote that requires very little grooming.

Since they are so intelligent, they have a mind of their own so training right from puppyhood is recommended. Boxer is gentle, friendly, quiet, playful, and protective by nature, and extremely patient, which has earned it the reputation as a great dog with children. Boxer is known for its great love and faithfulness for its master and household. It is one of the most affectionate dogs you can have in the family It originated in Germany and is known for its large size, which is an average height of anywhere between 28 to 32 inches and weighing about 110 to 175 pounds. It belongs to the working group and mainly comes in 6 colors, that is fawn, brindle, black, harlequin, mantle, and blue. They are often referred to as Apollo of dogs and are very obedient guard dogs that can easily be trained because of their intelligence.

Great Dane is a perfect example of the saying looks are deceptive Since it has a large and imposing appearance but is known as the gentle giant due to its friendly nature. It loves children, people, and other dogs. Also for a breed as large and powerful as the great Dane, obedience training and socialization is a must right from puppyhood as well. As the name suggested this medium to large-sized dog breed originated in Germany. It belongs to the working group with an average height of 22 to 26 inches and weighs anywhere between 55 to 75 pounds. It is extremely active and agile. German Sheperd is always willing to learn and eager to have a purpose. It is curious and one of the best dog breeds for search missions.

German Shepherds don’t become immediate friends with strangers and need to be socialized correctly. They are quick learners and are known to learn tricks in just repetitions. They are extremely curious, affectionate, loyal, intelligent, and courageous. German Shepherds can actually put their own life at stake for the protection of their families, which makes them one of the best guard dogs. This breed originated in England and belongs to the hound group. It normally weighs anywhere between 20 to 25 pounds and the height is around 23 to 25 inches. It’s either multicolored or white with black and tan, or brown. The Beagle is a scent hound that was bred particularly for hunting hare. They have strong tracking ability and a keen sense of smell.

Beagles have a tendency to eat whatever comes their way and therefore to overeat. As a result, it’s critical to keep track of the amount and sort of food they’re fed. It needs thorough training and may take some time to train them.

So you might have to keep some patients with the pup. Beagles are not very good protection or guard dogs because they are usually very friendly with everyone, they meet but this does make them one of the friendliest and affectionate dog breeds.