How would you rank the most dangerous animals in the world? If you’re like most people, the first five or six animals that come to mind are probably mammals, but that might not be completely accurate. Here are the 12 deadliest or most dangerous animals on the planet, starting with number 12 and working our way up to number one. 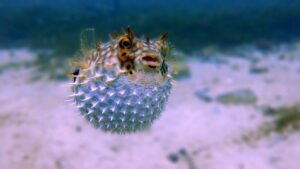 For centuries, Japanese fugu chefs have prepared and served puffer fish (also known as blowfish) sashimi. Many of these skilled chefs are specially trained to avoid being killed while cutting up or preparing puffer fish. Even when expertly prepared, however, eating it can be deadly—and not just for humans.

Dogs can also fall victim to puffer-fish poisoning from eating a fillet that was improperly handled. An anti-venom exists but is only available in Japan and many other parts of Asia, so if you find yourself in an area where puffer fish is commonly eaten and want to enjoy its delicious taste—don’t take any chances! Be very careful where you get your sushi from. Although beautiful and intriguing, these striped little fish have been found to be extremely poisonous. Lionfish can cause temporary blindness in humans if their spines are punctured. They aren’t a species native to Florida and have overtaken much of the coastlines due to their voracious appetite for smaller native species. Poison from these animals have led to many human deaths.

The lionfish population will only continue to grow without an active campaign against them, as they are also very fertile fish that produce up to 30,000 eggs every four days! A real force on our fragile ecosystems, they’re one of 12 super dangerous animals in the world. Found in shallow tide pools and coral reefs in South-East Asia, they’re tiny but extremely dangerous animal. Their venom contains a toxin 1,200 times more powerful than cyanide and can kill an adult human within minutes. There is no known antidote and there have been no known cases of successful treatment.

Their shy nature makes them difficult to spot so you should avoid wearing shiny jewelry or brightly colored clothing when swimming with them. And even if you never see one of these little guys, don’t touch your eyes after handling any water from their habitat — as little as 10 microliters of their toxin is enough to kill you! ( source ) 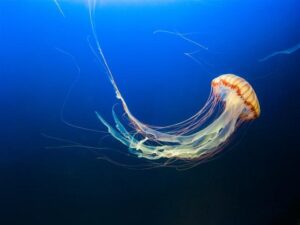 This jellyfish can be as small as an inch and is capable of killing a human with its venom. However, it’s difficult to spot because it doesn’t move around much. Despite its toxic venom, though, humans don’t always die from their stings; most are hospitalised for several days but end up recovering fully.

One particular species of box jellyfish has been found with some of the most potent toxins known to man: Chironex fleckeri produces millions of micro-envenomating barbs that release toxins powerful enough to kill 60 adult humans within minutes. The stonefish is native to Indo-Pacific waters. It has a long, stony dorsal fin that delivers one of its most powerful and painful stings in nature; it’s also coated with poison spikes. If you come across a stonefish, be careful not to step on it—that will release its venomous spines into your body.

For people who know what they are doing, there are ways to kill a stonefish without getting hurt (though it is illegal in many countries). Do not try removing a sting from your skin with tweezers or any other method unless you have been trained by a certified professional. 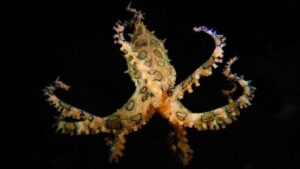 You might have seen these adorable little octopuses on shows like Animal Planet or Discovery, but you should remember that just because something is cute, doesn’t mean it can’t kill you. These dangerous animal are small but poisonous. So if you do ever encounter one in real life, steer clear.

They’re more likely to stick to ocean floors than come into contact with people, but they aren’t afraid of eating each other and their bites can contain enough venom to kill 26 adults within minutes. (That’s a lot of deaths!) (Image) 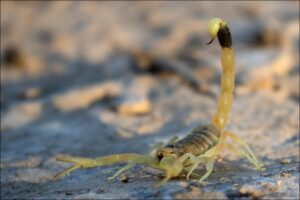 With its long tail and needle-like stinger, you definitely don’t want to get stung by a deathstalker scorpion. However, if you do end up being attacked by one of these prehistoric arachnids, don’t worry: death is unlikely. That said, it can still cause some pretty severe symptoms including headaches, paralysis of voluntary muscles and respiratory failure. Still not scared? You might change your mind when you find out about black widow spiders… 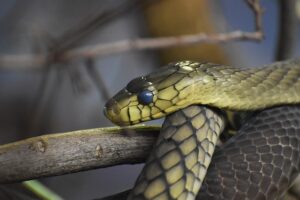 Africa’s black mamba is a big, aggressive serpent that has a neurotoxic venom. Its bite causes paralysis and possible death within 15 minutes if it can’t be treated. It grows to about 14 feet (4 meters) in length and is considered one of Earth’s most deadly animals.

This super dangerous animal eats birds, rodents, monkeys and other snakes, such as cobras, pythons and vipers. Black mambas have one of longest fangs relative to body size of any snake. They often lay flat against a tree or rock while waiting for prey to wander by so they don’t give themselves away with their distinctive hissing sound until they have time to strike. 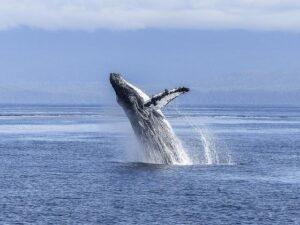 Though they are not aggressive, humpback whales are large and can become quite dangerous if they feel threatened. They can weigh more than 100 tons and be 45 feet long, so it’s easy to see why you wouldn’t want to get too close. When in danger, they may flail around wildly and use their tail to hit objects hard.

A whale’s impact could cause a large splash or shock wave that could toss people into water for a swim or even kill them if it’s powerful enough. Because of these dangers, swimming with humpback whales is illegal in many areas. Even though there have been no attacks on humans by humpback whales, be respectful of their space when near one in open waters since you never know what could happen. When looking for super dangerous animals in Africa, look no further than its most famous snake, black mamba. These are known to be very aggressive and will attack humans unprovoked. They are strong enough to bite through boots, with their bite delivering powerful neurotoxin.

Bites cause instant death if not treated immediately. About 1/10 of people bitten die before getting medical attention, making them one of scariest and deadliest animals in Africa. If you’re bitten by a puff adder, expect massive tissue destruction to muscles and soft tissues, as well as potential damage to your eyes, brain and nervous system. This is especially true if you aren’t treated with anti-venom immediately after being bitten. If left untreated for long enough, it’s likely that these bites will result in death—making them some of the most dangerous animal bites in existence.

As far as snakebites go, they’re also one of the fastest acting. Within just 10 minutes of being bitten, symptoms such as swelling, sweating and severe pain start to set in. Fortunately, deaths from puff adder bites are rare because antivenin exists; however, even with treatment available there are still cases where people have died from these bites. It goes without saying: Don’t mess around with puff adders! With a set of razor-sharp teeth and claws, strong jaws, and impressive agility for their size, lions are truly a force to be reckoned with. You don’t have to travel too far back in time before realizing just how much of a danger lions were—in fact, even as recently as 2017 there were 665 human deaths caused by lions each year (most of them young children).

It’s easy to forget that these most dangerous animals still exist out there in modern times. And if you thought your chances of encountering one was small… well let’s just say it isn’t. You might want to reconsider a family safari if you live in Africa!

How to take care of dogs in winter