cats continue to be the most popular pet and various households and cultures. They are intelligent, affectionate, and easy to care for. cats, unlike dogs, are smaller and cleaner.

They also don’t need to be walked, which is convenient for people who are always on the go, some pet owners prefer specific breeds in their homes. You might be surprised at how expensive certain cat breeds can be. so let’s have a look at the top 10 most expensive cat breeds in the world.

The Norwegian Forest cat originated in northern Europe. made our List of the most expensive cat breeds. This cat is well suited to cold climates. The interesting thing about this breed is that it may have descended from short-haired cats brought to Norway by Vikings around 1000 AD. It is also thought that the First short-haired cats, mated with Siberian and Turkish Angora breeds. This breed is predisposed to kidney and heart disease. The cost of this breed is approximately $600. However, depending on the quality and appearance of the cat that you intend to purchase, it may also be more expensive.

The Egyptian Mau is the next most expensive cat breed on our list. It is a small to medium-sized cat with distinctive natural spots. The Bahraini Dilmun cat is another breed that exhibits this trait. The Egyptian Mau’s spots are distinct in the way that they only appear on the tip of the coat.

The Egyptian Mau first appeared in 1952. According to legend, the Egyptian Mau originated in Egypt. DNA, on the other hand, proves otherwise genetic testing revealed that it was of North American and European origin. The Egyptian Mau is also thought to be one of the ancestors of the modern domestic cat. The Egyptian Mau’s physical characteristics differ significantly from those of other cats. The shorter front legs are one of the most noticeable differences. How do you identify the Egyptian Mau? from the head to the tail of the spine, it has a long dark dorsal Stripe.

In terms of temperament, the Egyptian Mau is friendly and loyal. Making it ideal for families with children. This bread is so popular that it inspired John Tenniel’s illustration for Alice in Wonderland. This breed has existed for a long time. Its roots can be traced back to the first century. It was thought that the Romans brought it to Europe, where it interbred with other cats to evolve into what it is today.

The Scottish Fold is a breed that is known for having a deformity in the cartilage that causes its ears to “fold”. Its appearance has been described as “owl-like”. Before the 1960s, the Scottish fold was known as a lop or Lop-Eared. It wasn’t until 1966 that the name Scottish Fold was adopted. The original Scottish Fold was a white barn cat with an ear mutation. It was registered as a new breed after its kittens were born with the same folded ears. If you plan to buy a Scottish Fold, keep in mind that this breed is prone to a variety of ailments, including mites and deafness.

This is also Why the Scottish Fold has been bred with other well-known cat breeds like the British and American Shorthair. The price range of this cat breed is $1500 to $2500 or more.

The Sphynx cat is another one of the most expensive cat breeds on our list. It is distinguished by the lack of hair on its body and has gained popularity since the 1960s as a result of selective breeding.

One of the most common misconceptions about the cat breed is that it is hairless. In fact, the skin has a hair-like texture. The issue of this breed is that they lose more body heat than other breeds. 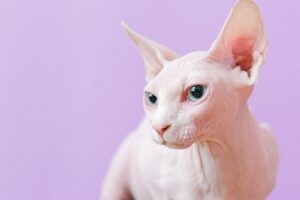 If you decide to purchase a sphynx, don’t be surprised if it’s an extrovert. Despite this behavior, they’re known for being loyal and affectionate to their owners. This is also a cat with a more dog-like demeanor. It welcomes The owner and is even friendly with strangers. This cat breed price range is $1500 to $3000.

Another breed that made the list of the most expensive cat breeds in the Russian Blue. Even at $3000, this breed is something to consider if you prefer a cat with beautiful fur as well as a close bond with humans.

It is distinguished by its slate grey dense coat. It has been known for more than a century. This cat is believed to have originated in Arkhangelsk, Russia, as the name suggests. Archangel Blues is another name for these cats. The cat is thought to have been brought from the Archangel Isles and Northern Europe in the 1860s. During the second world war, breeders developed this specific breed over years. There was a scarcity of Russian blue cats at the time. This prompted breeders to cross-breed with Siamese. This can is something that will grow on you. It has a lifespan of 10 to 20 years. In some cases, these cats live for up to 25 years.

If you have thousands of dollars to spare, you can buy a Peterbald, another most expensive cat. It’s thought to have originated in Russia and resembles Oriental shorthairs. There are various types of Peterbald cats that you are likely to encounter.

Some cats are born with a straight coat, While others are born bald. one of the most distinguishing characteristics of Peterbald cats is the presence of a hair-loss gene. This cat is exceptionally intelligent and well-mannered. If you have other cats or children, that is also a good idea to include the Peterbald. If you look at the history of Peterbald, you will notice that it was a more recent cat breed. It was developed in st. Petersburg, Russia in 1994. It was the result of the Sphynx experiment. A Peterbald cat breed’s costs range is $1700 to $3000.

The Bengal cat is a domestic cat that is one of the most expensive cat breeds. It was created in order to resemble a wild cat. It resembles an ocelot or a leopard based on its appearance. It’s not surprising, given that it was red with Asian leopard cats. The Bengal cat’s evolution was entirely coincidental. The Asian Leopard cats were Bred and domestic cats primarily to investigate the breed’s apparent immunity to feline leukemia. The price range of this breed is $1500 to $3000.

This is no longer the case with the Allerca Hypoallergenic cat. Despite your allergic reaction to cats, you would be able to enjoy becoming a cat owner. The Allerca Hypoallergenic cat costs around $6000, but it has been known to sell for as much as $50000. Yes, the price is exorbitant, but this is a breakthrough that cat lovers are willing to pay for.

According to the researchers who created this breed, the one responsible for allergic reactions is fel d1, a protein found in their saliva and skin. Should you make the switch of this breed? There are still reports that a small percentage of cat owners are allergic to cats.

Ashera is the most exotic domestic cat in the world. Like the Bengal cat, it was bred from Asian leopard cats. This expensive cat costs up to $125,000 and has contrast spots that give it a leopard-like appearance.

These cats are said to be friendly with children and can be taken out and walked on a leash. However, because the cat is from a hot climate, it is a good idea to set the cat with a heated blanket during the winter months. cats make excellent pets. Those looking to purchase exotic cat breeds, on the other hand, may have to spend more money than usual. Because some of these cats were bred from wild cats, they may or may not have the desired temperament.